The Australian Constructors Association (ACA) today released its roadmap for major industry reform which it believes could unlock billions in project cost savings each year and create more than 10,000 new jobs.

Jon Davies, Chief Executive Officer of the ACA said: “Globally, the construction industry significantly lags other industries in productivity. In Australia by just halving this gap, there is an opportunity to build an extra $10 billion[1] of infrastructure each year for the same price, the equivalent of an additional Inland Rail Project, creating over 10,000 new jobs.

“That is a huge opportunity for government, for the industry and the community – largely driven from adopting a more efficient and collaborative approach to project procurement and delivery.”

“Ahead of a new wave of economic stimulus spending focused on infrastructure, we believe that consensus must be reached urgently on the use of procurement models that align the interests of all stakeholders to leverage economic and social outcomes, improve industry culture and increase capability, capacity and skills.

“As an industry we recognise we have a responsibility to find and deliver improved efficiencies. We want to work with Governments at an earlier stage to de-risk projects and expedite design and construction to deliver much needed stimulus earlier than traditional processes allow whilst improving project value and increasing certainty of outcomes.

“Our members are committed to supporting government’s strategy to leverage the construction sector to restart the economy and help Australia’s post-COVID economic recovery. There is now a real impetus to fix the underlying issues and stretch taxpayers’ dollars further on job creating projects,” Mr Davies said.

The ACA’s roadmap, Sustaining the Infrastructure Industry is a detailed analysis prepared with BIS Oxford Economics (BISOE) which finds the industry is locked into a spiral of financial and productivity losses that links major project cost overruns and disputes to poorly constructed contracts that promote an adversarial industry culture which in turn negatively impacts the ability of the industry to attract and retain the people required to deliver the projects. 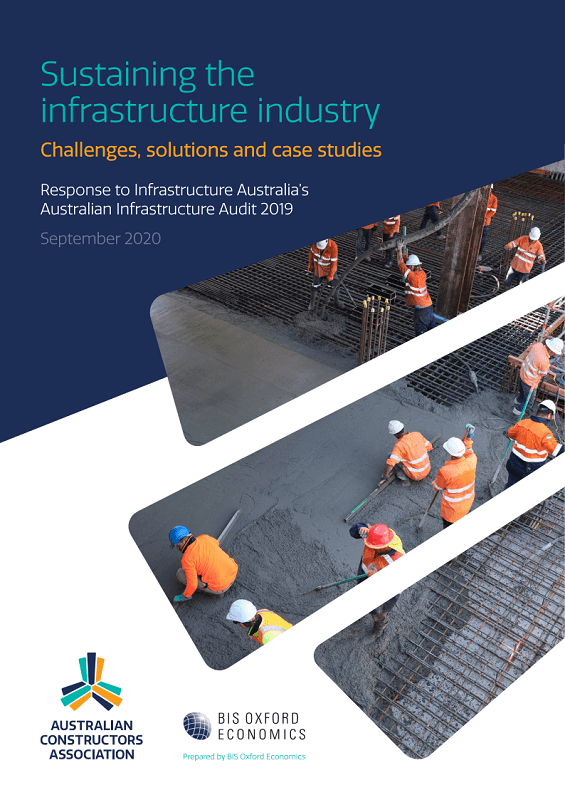 It finds this has been exacerbated by the growth in mega-projects often located in dense urban settings that have significant risks and unknowns that are not being fully investigated before projects start.

The report recommends a number of actions to address the core issues facing the industry including:

Mr Davies said the proposed charter was a recognition by industry that it shared in responsibility for the current situation and needed to lift its game.

“The COVID-19 pandemic has demonstrated the importance of strong alignment between the many stakeholders in the construction industry and the need for reform. It is incumbent upon us all to grasp this opportunity with both hands and collaborate to develop a more sustainable industry for the benefit of all Australians,” Mr Davies concluded.

The ACA will shortly release a framework for industry reform and introduce a charter that outlines industry commitments to achieve a sustainable construction industry. Progress towards achieving these commitments will be openly and transparently monitored and reported.